Chilling on Monday night, crunching through my vast and yet impressive photo collection. From the magic of TiVo I listen to the voice over from mark rudd’s unpublished memoir – (paraphrased) re: no innocent Americans; all guilty – all Americans were legitimate targets of attack; dishing out to them what they had been dishing out to the Vietnamese and others…. played over the video images of Nixon at an ball game, maybe – some event with ‘god bless america’ being sung.

Helped me recall the words of Billy Bragg from the show I enjoyed so much the other week. He was commenting/railing on fighting for the end to cynicism; that cynicism allows for crazy things to happen allegedly in the name of a free people. He has a point.

“change the things that make your life unlivable” – oh – so the Mark Rudd fellow, and I believe this quote, were from the movie Weather Underground. I can probably search back to when I saw the screening of this at the Oscars – a moving tale of how people who got to the point of not believing in non-violent civil disobedience went through with what is truly terrorist actions. They blew the shit out of gov’t buildings, oil company buildings, all sorts of places to make a point – and I’ll hand it to them, they were making a point about an actual event/policy. Another cool thing I took away from the show last night was that they ran into problems with no one paying attention to them, and then after the end of the Vietnam War, that they were essentially without a major rallying call (there’s was ‘bring the war back home’) – thus they became fairly irrelevant. Sadly, as is shown in the movie – there was lots and lots for them to be the loud voice for, it just didn’t work out that way.

And now – I wouldn’t even dare think about making noise the old fashioned way. Guess the ‘radicals’ of the 60’s have all grown up and taken positions in the system that keeps valid grievances from being dealt with head on. How’s the ‘treating our veterans as the heroes they are’ worked out? Did bailing out the fat cats of Wall Street actually make our country better? Or did it just preserve the way of life that allowed them to become fat cats (and thus supporters of the politicians who rescued them) with no real change in the way they risk our well-being, but not theirs?

Ok – kinda harshing my buzz here – the movie is one to watch if you can find it. Highlights periods in our recent history that no one brings up nowadays. I can only hope that for the future rebels of the system, the ease in which they can find the story, and realize the good and bad sides of taking a path not chosen by many, will allow even better focus on what they want to change (free education for everyone paid for by increase in corporate taxes?)

Well, one thing I’m not planning on changing at all is how much I love Blue – cause she somehow manages to help me find my calm and collected soul when ever I need to. 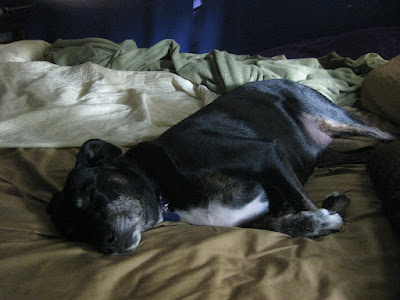