right this second she’s comfortably ensconced between me and Boo. earlier tonight I spun the bed back to it’s original position, thus exposing the windows which when opened overnight in the North Carolina spring allow beautifully cool air to wash over our tired bodies.

Blue, having had the lucky day of being over at M&B’s, seems a tad tuckered out, probably due to Boo’s focus on running her in their backyard. Tuckered, broken, but oh so cute.

She’s a comfort to me, both the physical warmth and fuzzyness, and the mental chess piece that says “hey, if you could get me a biscuit, it’ll be all alright!” – her simple pleasures make my life that much richer.

I’m not ashamed to say I love my pup. her place in our lives is a good place, and makes us better because she’s here with us.

I like watching her eyes as she tries to stay awake, but is just too sleepy to succeed at it. I even like her thrashing as she has puppy dreams and goes a running in her sleep.

She lays atop our green blanket, with fresh sheet below, the outdoor scents blowing in through the window – I hope she’s happy and content. She deserves to be.

Unlike this the other day: 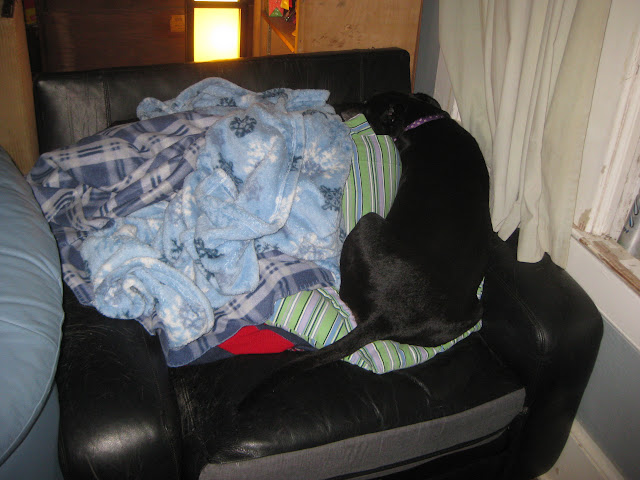 Not quite enough room to be comfy, but enough for her to perch there for a bit.

Why, you may ask, am I going on and on about Blue tonight, with it being quarter ’til two in the morning? Well, you see, just finished watching a movie. I love movies. Even love a good documentary from time to time.

Tragically, the Oscar nominated director, Tim Hetherington, was killed while in Libya today. I had wanted to see this film – the title didn’t give me much of an idea about what it was about. Unlike, say, The Hurt Locker, which I just saw the other week. Restrepo is gonna be the movie I think about in the years to come.

Documentary can be very powerful. This movie has me thinking that for the last 10 years or so I’ve not thought of nor cared much about our war fighting in Afghanistan. Now I’m interested. Interested in the people who live in a country that apparently has an endless supply of rocks and bullets. How do they do it? why do they do it? what the hell are we fighting for over there?

Isn’t that always a good question to ask?

TED this week – watched this:
Most of us will do anything to avoid being wrong. But what if we’re wrong about that? Kathryn Schulz makes a compelling case for embracing our fallibility. Watch now >>
Loved the ideas she presented – how does it feel to be wrong? Actually, you’re describing what it feels like to realize you’re wrong – when you’re actually doing the wrong thing, it feels just fine.

Also this one – ties in nicely with Restrepo.
By leading his audience step by step through an unfamiliar worldview, sociologist Sam Richards asks: Can anyone truly empathize with another? Watch now >>

And finally this one –
Using wikis and digital fabrication tools, TED Fellow Marcin Jakubowski is open-sourcing the blueprints for a self-sustaining village (starting cost: $10,000). Watch now >>

cause really all I ever want anyone to do with my TED blather is to take away an idea worth sharing. I tell my peeps here in D’Town, hopefully Blood says something to her PacNW peeps, maybe MickeyMatt has a chat in Upstate… cause at the end of a day – hell, the end of a week of scott being miserably sick, a tornado or 10 sweeping through my state, the world being kinda hellish to everyone, a year after BP oils up the gulf, years after home grown terrorists try to make a point about the problems we’re having in our own country, let alone worlds away – there was a pup at OP Restrepo, a black pup with a white patch. The guys there seemed to be happier with the pup around. A pup like blue. Blue makes the world a better place for me to be in. A better place for Boo and our friends to be in. 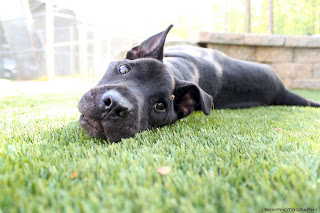