Here’s blue on the way to the vet… 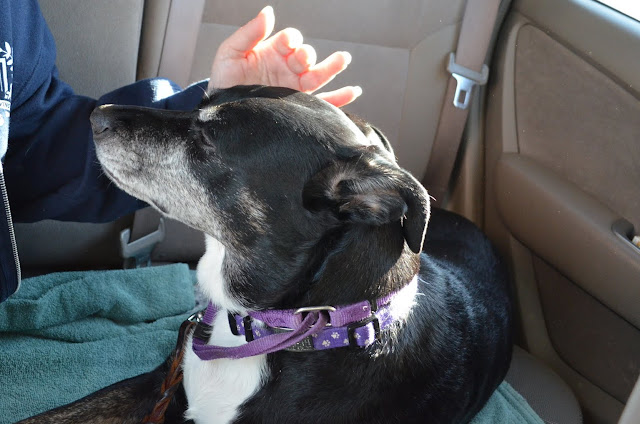 As Facebook Friends may already know (if they read Boo’s feed) Blue ended up in the hospital yesterday (Thursday, day two of Obama’s Hell Yes We’re Staying! celebration) since on Wednesday she decided she didn’t want to do her ‘I love beans oh beans beans beans beans beans’ dance. Which concerned us very much.

The piles of doggie vomit also concerned us very much. and when she performed ‘doggie vomit with meaning, a movement in three parts’ for us Thursday morning, after no dinner Wednesday night, we set off to enjoy a sunny day visiting two local vets. Sigh.

We’re all taught (or should be) that dogs are just animals – little ones need to be careful of the front ends, for that’s where they ‘mean business’ with teeth and claws. As we get older, we realize the back end also means business, of a more sinus/room clearing nature.

Never taught, or that I’ve ever heard said out loud in a dog owner training class, is how they attach themselves to your heart. May be a special connection between the hairs we breath in and their warm soft scratch-able underbellies, like a weak magnetic force or something.

Blue’s ‘pointy’ end decided at some point in the quasi-recent past that eating a piece of one of her chew toys was a fun and worthwhile use of her time. We’re not perfect parents to Blue, so of course give me a week or three and you should be able to swing by and eat off the floor, since she’ll never have a non-digestible chew toy again without multiple adults supervising her. Sigh.

Weird (and incredibly bumming) truth is that our first vet took a squeeze of her, guessed that something was up with her lungs maybe, and had x-rays to prove that ‘there’s something there…’ … oh the couched terms … ‘a mass’. Boo did not take that news well, and I was quite frankly too sleep deprived so my reaction was less than full-hearted. Sorry Boo, up side was I was able to drive pretty ok.

Off to a specialist for the potential of an ultrasound guided poking of the thing with a stick (sure there’s a more correct medical term, but fuck it – I’m not getting the bucks for performing it, so why do I need to be able to spell ‘aspirant’??)

Kinda cool note – they ran blood work and had it ready for us after we had a coffee and morning sammy over at the Dunkin. wowsers.

At the vet’s hospital that shall not have a decent sign to pull into (in Cary, oddly), more blood work, more x-rays, and an abdominal ultrasound later Doc Brown calls (why can I only hear him saying “1.21 gigawatts! 1.21 gigawatts. Great Scott!”) and shares a litany of concerns and issues – most important being an obstruction in Blue’s gut. insert sad/happy face here. Also endocrine issue, as well as heart/lung mass we’d need more testing for.

Absurdly deep well of relief to hear that the reason your beloved ‘nimal is all totally not herself is fixable with an expensive surgery. Totally takes your mind off her probably having cancer. (see how I waited to type that word until way down here? probably need to talk with a therapist about that … probably got some easy reasons I can help them figure out…)

Now it’s 10:31am on Friday. I didn’t go to school last night, I took a relaxant. Friends visited with Tiramisu.  Boo let me crash after we got back from leaving Blue for surgery and an overnight at the Vets.

It almost balanced out the hours I spent Wed night to Thurs morning yelling at the yappy dogs in my head to ‘shut the fuck up!’ to which they responded ‘go fuck yourself! danger danger doom doom!!!!” (shut the fuck up!)… as the universe had it, I was to take in the awesomeness of the film The Big Lebowski (though I wasn’t quite able to nail down the core truth as the credits rolled…)

Since I was already up and rocking in a semi-fetal position in front of the television, I popped in my copy of ‘Reckless‘ and sank into a truly unprofessional assessment of my fear-avoidance self-determinism of my mid-80s mid-teens self, as exampled in my ‘fear’ of seeing the movie more than once back in the days it was at the theater (Sangertown Square 12!!! or was it 8? fuck…) for its awesome escapism – both in literal and figurative story-telling – was – and still is – quite compelling.

Also, Jennifer Grey’s first film appearance! Bonus also – Stuebenville, Ohio is where the ‘ledges’ are for Johnny Rourke (Aidan Quinn) … pretty sure I spend the rest of the 80s and part of the 90s looking for my very own vantage point.

Though that plan of attack worked, because if nothing else the body does have ways of shutting down the yapping puppies, it didn’t make the eventual awakening to Boo saying ‘Blue vomited a lot, I’m calling the vets office’ any easier. Fears, meet reality. Reality – go fuck yourself. So that’s how my yesterday started …

I certainly enjoyed greatly the treat the Boys dropped off, and with the proper amount of stress-reduction invoked slept fairly well.

But the house is too quiet. Blue was not running in her sleep between Boo and I last night (thus my kidneys don’t feel bruised this morning), there’s no clicky clacky-ing about as Blue traipses from soft napping in the bedroom to the brighter, but just as soft napping in the living room, to the eventual curling up at Boo’s toes under Boo’s desk. There was again no “Dance to Indicate My Love for All That Is Green Beans and the Joy They Bring (in two parts)” which, though perhaps a bit biased, I will use as proof that the world is still good, and worthwhile an effort to make better. Cause have you seen Blue’s entire body when she’s getting beans with her kibble? it’s sooooo awesome…

A quiet house is not a happy house, I guess is what I’m saying.

Cool note – apparently blue’s having a FABULOUS morning, post-op procedures including the Methadone treatment for pain relief. Yay, our very own ‘rock-star’ pup is at the ‘clinic’ dealing with an eating issue. Blue is such a cliche. 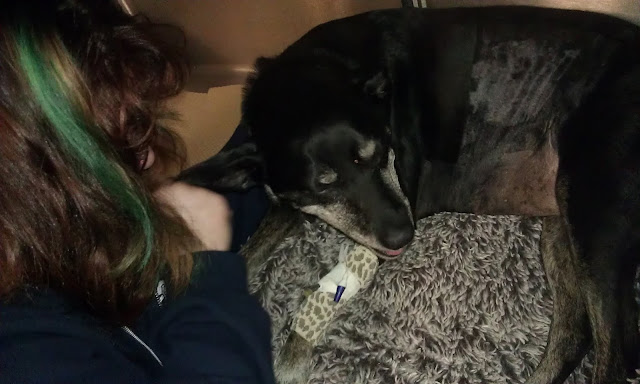 and we love her sooooo much, no matter how much she hurts our hearts.

Hold your loved ones close, let them know how much they mean to you. Try to do that with extra scritches and perhaps a bonus treat for no reason what so ever. 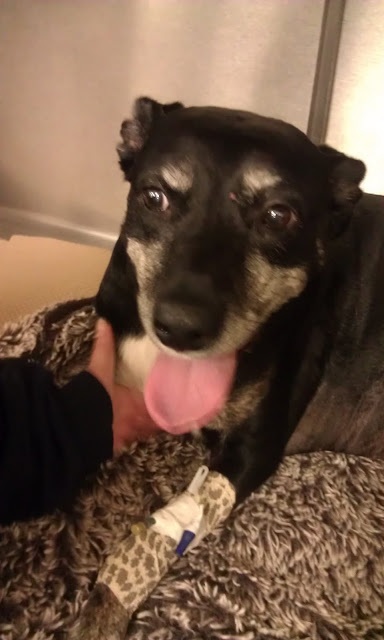 We’ll be able to get back to ‘normal’ tomorrow morning … might not get to blogging about it til a while later. Hard to type when the keys are wet…